Dr Simon Poole and Dr Steven Frisken have received the prestigious 2013 Australian Academy of Technological Sciences and Engineering's Clunies Ross Award for innovation in science and engineering at a gala dinner in Melbourne tonight (Wednesday 15 May 2013).

Since teaming up in 2001, Poole and Frisken have positioned Australia as a global leader in optical communications – their new technologies shaping the internet worldwide, some of which are at the heart of the National Broadband Network (NBN).

The pair's industry-leading products, including undersea communications systems, have been sold to major telecommunications equipment manufacturers in Europe, the United States and Asia – generating more than $200 million in exports from their high-tech facilities in inner-Sydney.

Professor O'Kane says Dr Poole and Dr Frisken have made a significant impact on global development through information technology.

"Simon and Steven, as individuals and together, have played an integral, innovative role in developing and commercialising advanced optical communications components that support the internet," Professor O'Kane said.

"They have bridged the gap between research and the marketplace, and their groundbreaking technologies – including the Wavelength Selective Switch, which enables different wavelengths of light to be switched between optical cables – have reaped broad economic and social benefits.

"Since getting together 12 years ago, Simon and Steven have grown their business from a seven-person operation, to a team of nearly 300 operating out of state-of-the-art development and manufacturing facilities at Waterloo

"They continue to break new technological ground for the company they founded, Finisar, through research work at the Centre for Ultrahigh Bandwidth Devices for Optical Systems at the University of Sydney," she said.

"Their tremendous intellect in science and engineering, and their ability to commercialise the technologies they have developed, make them very worthy and deserving recipients of this prestigious award," she said. 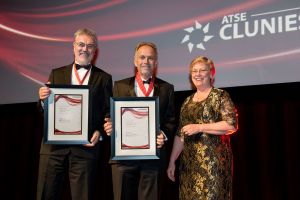