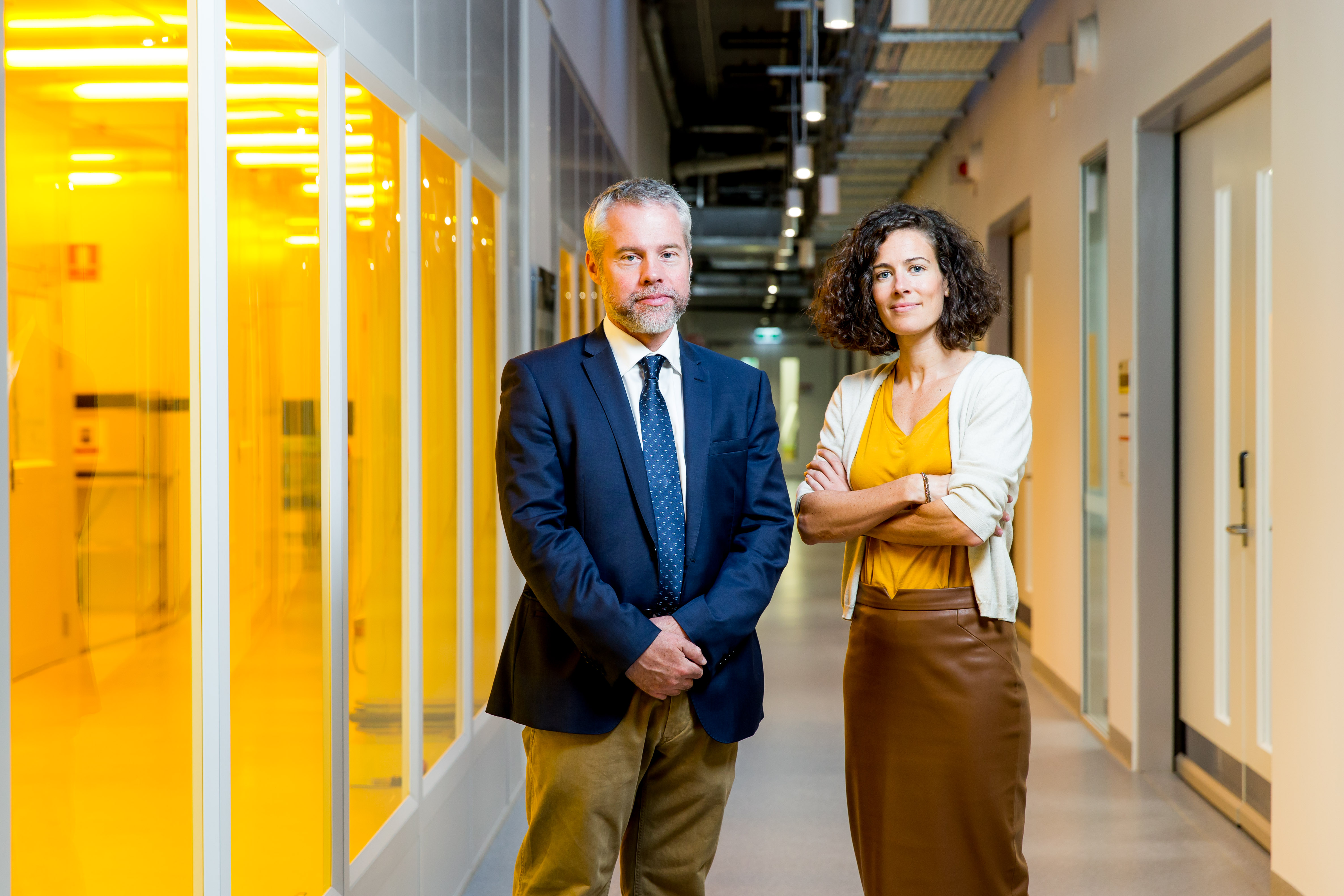 Pictured: Professor Ben Eggleton and Dr Andrea Blanco-Redondo from the Centre for Ultrahigh bandwidth Devices for Optical Systems at The University of Sydney.

Source: The University of Sydney

An international team of researchers from the Australian Research Centre of Excellence CUDOS (Centre for Ultrahigh bandwidth Devices for Optical Systems) at the University of Sydney and Technion - Israel Institute of Technology have demonstrated the first topologically protected waveguiding in a silicon nanophotonic platform.

The research findings published on 21 April 2016 in Physical Review Letters are a key advance towards the development of robust optical circuits that has the potential of enabling large-scale optical integration and quantum information processing.

CUDOS lead researcher, Dr Andrea Blanco-Redondo said “this result highlights a path forward that will allow for achieving desired photonic chip performance even in the presence of unavoidable fabrication imperfections.”

The team at Technion, led by Professor Moti Segev and the group at the University of Sydney, led by Professor Ben Eggleton, CUDOS Director, have collaborated since December 2013 to create on-chip photonic topological insulators for optical interconnects that are robust against fabrication disorder.

The work builds on the breakthrough research of Associate Prof. Mikael Rechtsman, formerly of Technion, who opened up a whole new area of study with the demonstration of the first photonic topological insulator in 2013.

Since this discovery, all experiments on topological phenomena in photonics remained at the level of a proof-of-concept - none of them was in a technologically viable platform until now. The joint project between CUDOS and the Technion aims to achieve a big step towards technology that will dramatically increase the bandwidth and processing speed of next generation computers.

“Topological photonics is a new paradigm in optical sciences and promises completely new functionalities and properties that will enhance photonic circuits. This project, which was supported by the Technion Society of Australia and the NSW Department of Industry, highlights the globalization of research and innovation,” said Prof. Eggleton.

They were also able to demonstrate that in a system where topological and trivial defect modes exist, researchers can probe them independently. Professor Segev said the research opens up a new area of study using concepts of topological insulators in actual technology, not only in photonics, but universally, in various other areas of physics.

“What we did here provides deeper understanding of the nature of topologically protected transport in photonic systems, and suggests such phenomena in other physical systems, such as condensed matter physics or atomic physics – wherever topological and trivial states coexist,” he said.

Frontiers in Nanoscale Photonics Research Project
The partnership between Technion – Israel Institute of Technology, CUDOS at the University of Sydney and the NSW Government aims to use advances in photonics to revolutionise computer chip technology, potentially leading to important breakthroughs for the field of telecommunications.

Project challenges
The heat generated when electrons are moved around from one part of the processor to another limits current computer chip technology. One way to address this is to use photonic interconnects to route information across a chip, or between chips, using light. As light weakly interacts with matter, it does not heat up the processor.

While silicon photonics technology enables light to be wound around tight and complex circuitry, this also creates challenges. In particular, light confinement in a circuit is sensitive to manufactured or inherent imperfections such as rough edges of the circuit tracks. The light signal is then susceptible to scattering, resulting in information loss.

Scatter-free interconnects under development in this project are one possible solution to this fundamental roadblock in the advancement of next generation computer processors.

Project history
Mikael Rechtsman conceived the idea for this project during his time at Technion, in collaboration with Moti Segev. Rechtsman, who is today an Assistant Professor at the Pennsylvania State University, made a major breakthrough in 2013, demonstrating the first photonic topological insulator. That work (which appeared in Nature magazine in April 2013) has opened a new area of study and has been followed by many research groups worldwide. However, until now all experiments on topological phenomena in photonics remained at the level of a proof-of-concept: none of them was in a technologically viable platform. CUDOS researchers have created photonic circuits based on silicon nanophotonics, which formed the basis of this new approach.