NSW Chief Scientist and Engineer, Professor Mary O'Kane, has met landholders on the Liverpool Plains, in the state's northwest, about their coal seam gas worries.

Professor O'Kane is due to hand her initial report to the O'Farrell Government next week as she continues her independent review of the state's CSG activities.

On Tuesday (23 July 2013), Professor O'Kane toured the Liverpool Plains with members of the Caroona Coal Action Group to hear their concerns about the potential impacts of CSG on the region's prime agricultural land.

"The Caroona Coal Action Group has, as have many other community groups across New South Wales, done a very good job articulating their particular concerns about the CSG industry and today was a great opportunity for me to talk through those issues and discuss ways they might be addressed," Professor O'Kane said.

"It was a very productive morning and wonderful to be shown around the Plains by Suzie Lyle and Rosemary Nankivell, and also meet some local landholders along the way.

"Their concerns centered on water and land issues," she said.

Professor O'Kane said the issue of cumulative impacts of CSG and an expanding mining industry on top of agriculture in the region was also a local concern.

"There are a number of coal mines ringing the Plains and local landholders – both irrigators and dry-land farmers – are anxious about the risks posed by that activity, as well as the added potential impacts of CSG exploration and production on soil and water," Professor O'Kane said.

"Land devaluation is also another area of concern."

The Chief Scientist and Engineer was directed by the Premier in February this year to conduct an independent review of the state's CSG development, focussing in particular on human health and environmental impacts.

Professor O'Kane will deliver an initial report to the state government next week; however, the independent review will continue for some time. 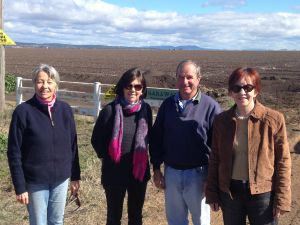