Based at the University of New South Wales' College of Fine Arts, the revolutionary Creative Robotics Lab (CRL) combines art, social science and engineering to develop the appearance, behaviour and sociability of robots.

Guests at the launch of the CRL in September interacted with Geminoid F (pictured top) – a lifelike female android created by Professor Yoshio Matsumoto from the National Institute of Advanced Industrial Science and Technology in Japan.

"Robots are the way of the future. This doesn't mean they will replace humans but they need to know how to respond to us," said Professor Velonaki. "We are interested in creating robots that respond spontaneously and naturally so that our interactions with them are more meaningful."

Researchers at the CRL use temperature and vibration sensors and thermal cameras to measure robotic responses to human touch, and their expertise in touch transmission and artificial skin development will help bring robots to their final interactive phase.

Future applications could include robots assisting patients in hospital environments.

Professor O'Kane says the work being done by the CRL involves experts in many fields.

"It involves pulling together disciplines including the Artificial Intelligence field of robotics; aesthetics; cognitive psychology; and theatre studies – with its powerful techniques to understand the unfolding of narrative," Professor O'Kane said.

"What makes a home in the Centre of Fine Arts so appropriate is that it is this dimension of drawing on the Fine Arts that has been largely missing in the robotics fields," she said.

Professor O'Kane said there is a sense of urgency and necessity about the CRL's work.

"We are an ageing society and becoming increasingly dependent on service industries. Such industries are becoming more and more expensive and this is one of the reasons our Japanese colleagues have been leading the way in exploring how robots can play a pivotal role in areas like aged care," she said.

The CRL will work in conjunction with UNSW's School of Computer Science and Engineering, the Australian Centre for Field Robotics at the University of Sydney, Stanford University, and Tokyo University.

To find out more about the UNSW Creative Robotics Lab, click here!

(Photos and Video from UNSW) 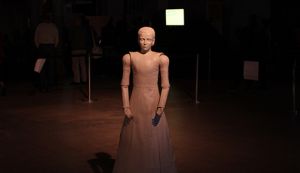