New South Wales will play host to hundreds of exciting events during National Science Week to allow the community to enjoy and explore the wonders and benefits of science.

The annual celebration of science kicks off this Saturday (10 August) with more than 1700 events to be staged across Australia.

Chief Scientist & Engineer, Professor Mary O'Kane, says 300 events will be held around the state over the coming week, and she promises there'll be something for everyone.

"National Science Week, which is now in its 16th year, is all about raising community awareness about the importance of science in our everyday lives and celebrating some of the outstanding scientific work being done across many disciplines," Professor O'Kane said.

"There will be 300 interactive events held right across the state during National Science Week – including everything from an electric vehicle grand prix in Newcastle, to a science circus at Castle Hill, and a laser light spectacular in Wollongong.

"I'm also launching Endeavouring Science at the Australian National Maritime Museum at Darling Harbour today, which I'm sure will prove popular with school groups and the general public.

"They'll have the chance to board the tall ship HMB Endeavour and undertake experiments in weather and navigation, biology and botany, and signals and communication, with some of our up-and-coming scientists – all while sailing around our beautiful harbour.

"There's definitely an event for everyone during Science Week, so I'd encourage you all to get involved," Professor O'Kane enthused.

Deputy Premier and Minister for Trade and Investment, Andrew Stoner, said the NSW Government's ongoing support for National Science Week played a critical role in raising the profile for the state's outstanding credentials as Australia's leading science and research hub.

"National Science Week is a fantastic opportunity for us to celebrate the achievements and advances made by the state's best scientists, engineers and mathematicians," Mr Stoner said.

"I encourage everyone in NSW, particularly younger people and the next generation of NSW science minds, to get involved in the many events taking place during National Science Week."

The Regional Science Hubs have added to the number of National Science Week events in 2013, including workshops on smart trees, biodiversity mapping tools and building modular sound units, as well as talks about sustainability, astronomy and marine biology.

"These types of science outreach initiatives are wonderful, and I would encourage experts in science, professional organisations and educational institutions to join with industry and community groups across New South Wales so that we can further engage the community through innovative science experiences," Professor O'Kane said. 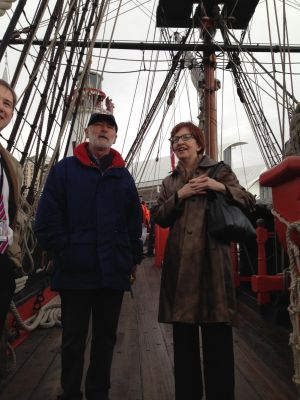 Chief Scientist & Engineer, Professor Mary O'Kane, with the skipper of the tall ship, HMB Endeavour, at the NSW launch of National Science Week 2013.