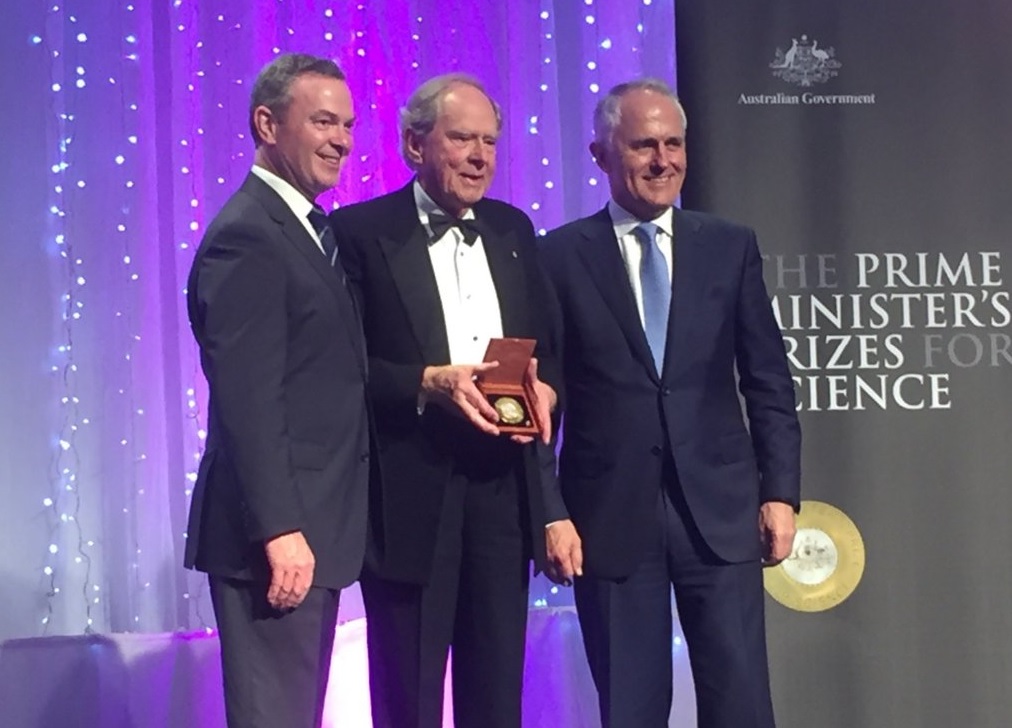 Laureate Professor Graeme Jameson AO from the University of Newcastle, whose mineral-processing technology has revolutionised the mining industry worldwide, was presented the inaugural $250,000 Prime Minister's Prize for Innovation at a dinner at Parliament House, Canberra, last night (Wednesday 21 October 2015).

More than 300 mineral processing plants around the globe use the renowned Jameson Cell - a floatation system used to remove oil, grease and other suspended solids from industrial wastewater and effluent.

"This is the latest in a very long list of accolades for Professor Jameson whose invention, the Jameson Cell, has proved to be a real game-changer in the mining industry," Mr Roberts said.

"The Cell is used internationally in the extraction of copper, coal, zinc, nickel, lead, silver and platinum – but it's been in coal processing that Australian has reaped enormous benefits, through the recovery of fine coal particles from wastes streams.

"It's widely accepted the Cell has added billions of dollars in mineral exports to the national economy annually since it was first used commercially 25 years ago.

"I commend Professor Jameson on this wonderful achievement and thank him for his tremendous contribution to innovation in NSW, nationally and internationally," he said.

Professor Jameson was named NSW Scientist of the Year in 2013, the year in which he also received The Antoine M. Gaudin Award – arguably the world's most important prize in the field of engineering science and industrial technology.

The technology used in the Jameson Cell continues to evolve and is now being applied to environmental practices, including the extraction of oil from tar sands in Canada, the cleaning up of industrial wastewaters in the Hunter, and the removal of blue-green algae from waterways in inland Australia.

Meanwhile, Associate Professor Cyrille Boyer from the University of New South Wales was awarded the $50,000 Malcolm McIntosh Prize for Physical Scientist of the Year at last night's event.

Associate Professor Boyer uses light to make new and complex polymers -- using it to create nanoparticles that can carry drugs into the human body to break down bacterial biofilms associated with implants, cystic fibrosis, and sticky ear.

His patented technologies will herald a new era of smart polymers and eventually he believes he will be able to reconstruct complex polymers such as proteins and even DNA.

And a teacher at a south-western Sydney school was also honoured with a Prime Minister's Prize.

As the school's Head of Science, Mr Silburn has transformed the way his students engage with science – through extension programs, interactive and hands-on activities, and a great deal of encouragement.

This has led to a dramatic increase in the number of Year 12 students choosing science. Fifteen years ago, just eight students did science in Year 12. Today, two-thirds of the school's senior students choose science and are performing above the state average.

Mr Silburn won a NSW Science & Engineering Award in 2012 for Innovation in Science and Mathematics Education.