The NSW Government has extended the terms of reference of the independent CSG review to "specifically examine the cumulative impact of all activities which impact ground and surface water in the catchment".

Concerns have been raised about the impacts of various industries on the 'Special Areas' – most recently surrounding possible CSG extraction on top of existing mining activities – including issues of subsidence and upsidence, ground and surface water interference, and contamination.

They observed parched swamps and dried up creeks near Cordeaux Dam; the cracked Waratah Rivulet, near Woronora Dam; and damage caused by subsidence to the Upper Canal, which carries water to Prospect Reservoir.

Photos from the field trip are available here!

"Obviously there has been a long history of mining beneath the catchment and the SCA is concerned by the damage it believes has been caused by those activities, as well as the possible cumulative impacts should CSG extraction be permitted in the 'Special Areas' down the track", Professor O'Kane said.

"It was very important for my team and me to see firsthand the affected areas, as we assess the cumulative impacts of all activities not only on the 'Special Areas' but the catchment generally," she said.

The State Government has imposed a moratorium on CSG activities in the 'Special Areas' while Professor O'Kane carries out her inquiries.

The designated 'Special Areas' are recognised due to their topography and importance in filtering surface waters that flow into the Avon, Cataract, Cordeaux, Nepean, Warragamba and Woronora dams, which supply drinking water to Sydney and the Illawarra.

The independent CSG review is expected to continue until late 2014. 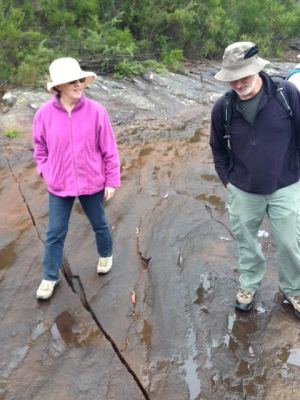