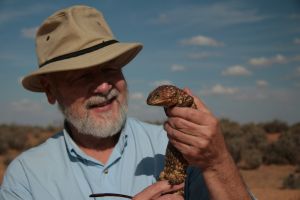 A world-renowned ecologist who has led the war against the toxic cane toad has been named the 2016 New South Wales Scientist of the Year.

Professor Richard Shine AM was presented the $60,000 award at the NSW Premier's Prizes for Science & Engineering at Government House, Sydney, this evening (Friday 14 October 2016).

Cane toads have devastated ecosystems across Australia’s north for more than 75 years; however, Professor Shine and his research team at The University of Sydney discovered a novel way to control the alien amphibians.

The team found cane toad tadpoles eat the freshly laid eggs of their own species as part of their fight for survival.

A pheromone found in the eggs attract the cane toad tadpoles, and the researchers were able to use the same chemical to lure tadpoles by the tens of thousands into specially designed traps.

Premier Mike Baird said the innovative solution had helped solved one of the most significant environmental challenges since the 1930s.

“Cane toads are not just confined to the tropics; they’ve penetrated delicate ecosystems as far south as Sydney – and they continue to pose a real threat to our native wildlife, including reptiles and marsupials,” he said.

NSW Minister for Industry, Resources & Energy, Anthony Roberts, said the Prizes highlight the incredible strength of NSW’s R&D sector and its importance to a healthy economy.

“A strong and dynamic research and development capability is a key driver for innovation in our economy, which continues to go from strength to strength,” Minister Roberts said.

NSW Chief Scientist & Engineer, Professor Mary O’Kane, also paid tribute to the winners – including the 2016 Scientist of the Year.

“The excellent work undertaken by Rick Shine and his team is yet another example of the high-quality research in NSW universities addressing real problems,” Professor O’Kane said.

The NSW Premier’s Prizes for Science & Engineering recognise research excellence and reward the State’s best and brightest for cutting-edge work including that that generates economic, environmental, health, social or technological benefits for New South Wales.

The winners of the nine category awards each received a trophy and $5000:

4. Excellence in Engineering and Information and Communications Technologies

7. Leadership in Innovation in NSW:

9. Innovation in Science and Mathematics Education in NSW:

For more information about the individual category prizewinners, go to http://www.chiefscientist.nsw.gov.au/premiersprizes/2016-Premiers-Prizes-Category-Prize-Winners