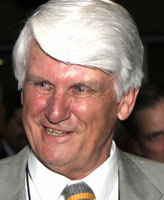 The man who oversaw construction of the Sydney Opera House has received a prestigious award in recognition of his lifelong contribution to engineering.

Dr John Nutt was presented the 2014 Australian Academy of Technological Sciences & Engineering (ATSE) Clunies Ross Award for Lifetime Achievement in Perth last night (Wednesday 21 May 2014) – honouring his influence on the engineering profession and commitment to the advancement of the industry over the past 50 years.

Dr Nutt, who is a former Chairman and CEO of renowned engineering consultancy, Ove Arup and Partners, in Australasia, pioneered the use of computers in engineering practice through the design and analysis of the Opera House roof; before overseeing construction and completion of the iconic building.

"Through his transformative leadership role with Ove Arup and Partners, including helping establish the consultancy's Australian practice back in the early 1960s, as well as his innovative design and analysis work on major projects internationally, John has revolutionised the engineering industry," Professor O'Kane said.

"While John's probably best-known for his role on the Sydney Opera House project, there are other shining examples of his work dotting city skylines around the world. In Sydney alone, John has overseen work on Westpac Plaza; Governor Phillip and Governor Macquarie Towers; the Park Hyatt at The Rocks; the casino at Pyrmont; and the Sydney Football Stadium.

"He was also heavily involved in the development of major facilities for the Sydney 2000 Olympics; exhibition halls in Sydney, Melbourne, Brisbane and Singapore; and road and port infrastructure here and in Asia.

"John has contributed so much to the engineering profession and remains committed to the advancement of the industry, particularly through education. He is a most-worthy recipient of the ATSE Clunies Ross Lifetime Achievement Award, and I congratulate him on this wonderful feat," she said.